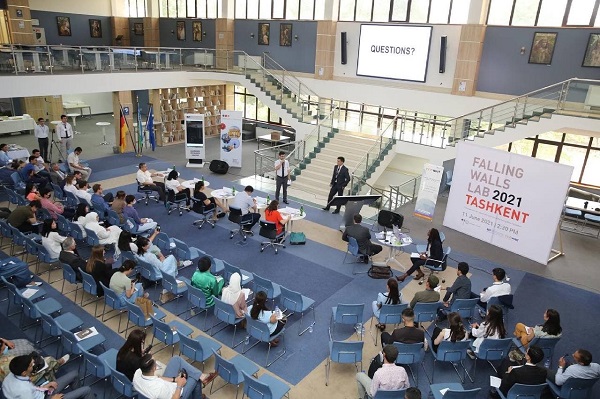 The Falling Walls Lab was held on the 11th of June, 2021 at Westminster International University in Tashkent. The competition involved thirteen participants, six of which were WIUT students and two students were among the top three finalists. Each participant had to pitch their business ideas in three minutes. The winner of the competition will visit Berlin in November to present Uzbekistan in the Grand Finale. This was the fourth time that the Falling Walls Lab competition was held in Tashkent. The Embassy of Federal Republic of Germany and the innoWIUT Entrepreneur’s Lab of WIUT inaugurated the competition. Christopher Fuchs, Deputy Head of Mission at German Embassy in Tashkent, Bakhrom Mirkasimov (Rector) and Michael Clarke (First Academic Deputy Rector), Westminster International University in Tashkent wished all the young innovators every success in presenting their ideas. WIUT thanks all participants for their enthusiasm and ideas, particularly would like to thank its partners, the Embassy of Federal Republic of Germany, the German Academic Exchange Service (DAAD), Falling Walls Lab, judges and guests for their active participation.

Published in WIUT News
More in this category: « Professional Development Training Memorandum of Cooperation »
back to top